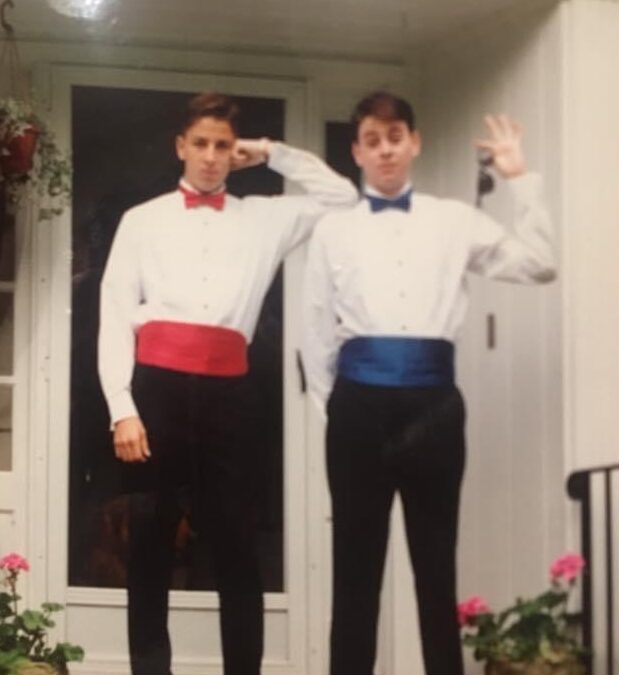 This morning I laughed harder than I have in a very long time. I also cried a bit too.

My brother Jimmy came over to help me pick up some furniture that we were giving him. I opened the bilco doors in my basement and a family of spiders scampered around and mamma spider was none too pleased about my presence. When my brain realized what I was looking at, I screamed as if I was facing certain death. When Jim realized why I was screaming, he did the same. Two forty-six year old men screaming at tiny little spiders—when I realized the absurdity of it all, I started to laugh, hard. My wife came downstairs, shook her head, and said, “You guys are idiots.”

Once we got the furniture in the car, I followed Jim to his house and unloaded the goods; a china cabinet and some shelving for a bathroom. With the manual labor behind us, we took some time to catch up which is something we don’t do often.

He’s back in the house he bought with his ex-wife when they first got married. He just went through an acrimonious divorce and the past few years haven’t been easy on him. As he was discussing the difficult relationship he has with his youngest son, I saw my brother in a different light—I saw him not as my twin brother, but as a fellow human.

I draw this distinction because I do feel as if we are harder on family than we are on other people. Maybe that’s because we are so familiar with our family members and, like “they” say, familiarity breeds contempt. Or perhaps we just hold family members up to higher expectations than the general public. Whatever the reason, I do know that I’ve been hard on Jimmy over the years.

We’ve always been close—we are twins! We spent almost every waking minute together throughout our childhood. He was my built in best friend. As we entered adulthood, though, we drifted apart. There’s a number of reasons for that and it’s not important to expand on them here, but it’s worth noting that, over time, the nature of our relationship changed. I found myself poking fun at his expense. Make no mistake, he makes it easy to do, but my nature is to always go for the laugh and he was often the butt of the joke.

This morning, though, I could see some pain in his eyes and it hit me—he’s just as human as I am.

Earlier this week, I was interviewing a bestselling author, Matt Haig, for my podcast and he was discussing the path to writing his first book. He recalled how he got the confidence to write that book after tackling a depression so severe he contemplated taking his own life. One thing he said during our conversation really struck with me—that we really have to learn to accept ourselves, flaws and all, in order to become better writers.

I want to extend that thought a bit further—in order to become better friends, family members, partners, etc., we have to learn to accept others for who they are. I know this isn’t easy.

There are many things that frustrate me about my brother. He gets upset very easily and little things lead to big rants. He has difficulty with anything remotely technical. He’s typically either very late or very early. Until recently, he never stood up for himself (this last one may be a family trait). Additionally, he’s always asking for help with something and for a long time I considered him to be overly needy. Conversely, I’ve had a history of never asking for help from anyone and I can tell you from personal experience that this characteristic is not at all a positive one.

What I realized today, though, when I saw him shut his eyes and reflect on my question ever so briefly, was that I need to learn to accept him for who he is, not who I want him to be. It was a “Newton getting beaned by the apple” moment for yours truly.

As I reflect on this more, I realize there is a host of people who fall into the category of people I resent because of one perceived shortcoming or another and, frankly, I’m starting to feel like an asshole.

If you are reading this and are one of those people who feel as if I’ve been short with you, please know that I’m a work in progress and accept my apology and a promise to do better. And thank you, Jimmy, for not only taking the china cabinet that we’ve been trying to find a home for, but for also just being you and letting your guard down ever so briefly earlier today.