His name is Mike and he likes computers 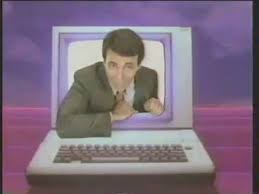 When my wife and I were going through premarital counseling, we had to attend a workshop with other engaged couples. On the first night of that workshop in 1998, all of us had to introduce our future spouses to the group. When it was my wife’s turn to introduce me, all she could come up with was, “This is Mike and he likes computers.”

“That’s the best you could come up with?” I asked when we both sat down.

“First of all, I was nervous” she replied and then added, “but second of all, you do.”

She was right, of course. Back in the early 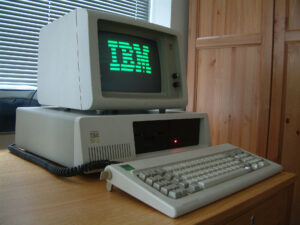 to mid 80s, all I wanted was a computer. The apple of my eye, pun intended, was an Apple IIc, the kind we had in my elementary school. As such, I was disappointed when my father came home with an IBM PC XT. I didn’t have a hard disk drive, just two 5¼ floppies, but it did have a four color monitor, so that was pretty cool.

At the time, all I could really use it for was to write papers (a God send for my teachers since my handwriting was atrocious) and play games (Indiana Jones and the Last Crusade was awesome). Then, one night in the tail end of the 1980s, I saw a commercial for a service called Compuserve, and I was smitten with the possibilities my computer could provide.

Playing games, shopping, connecting with other computer owners, and banking—was there anything this magical service couldn’t do? That a young teenager was more interested in these types of things over, say, I don’t know, getting fresh air on a beautiful summer day, could explain why my soon to be wife decided to out me as a computer geek to a room full of strangers. Fine, I’ll own up to my geekiness, but in this time of social distancing (or isolation), my knack for computers has come in handy.

For example, one of the things we love to do when friends come over is play the game Fibbage on TV. My brother in law called from Charlotte the other night and said, “Wouldn’t it be great if we could play Fibbage tonight?” The way the game is setup, everyone has to be in the same room to see a question posed on the TV and then answer using a mobile phone.

But yes, it would be fun. And I had an idea!

I asked my brother in law to download Zoom, web conferencing app, onto his iPad and then join my online meeting room. I then asked him to share his iPad screen to his TV so that they could have a more “normal” viewing experience. Then I downloaded the game to my computer, and used a screen sharing feature so that they could see my screen on their TV. After placing an external microphone onto my coffee table and hooking my computer up to my TV using an HDMI cable, we were ready to play.

Was it seamless? No, there was a little delay and we missed the dynamic of being in the same room as each other. However, for a few hours, we were all “together” and having a blast. The kids felt as if they got to have a more normal evening and we didn’t have to hear about how terrible we are for not letting them leave the house (we have three seventeen year olds who are quite restless).

So yes, my name is Mike and I do like computers and I think everyone in my house, for at least the time being anyway, is happy that I do.