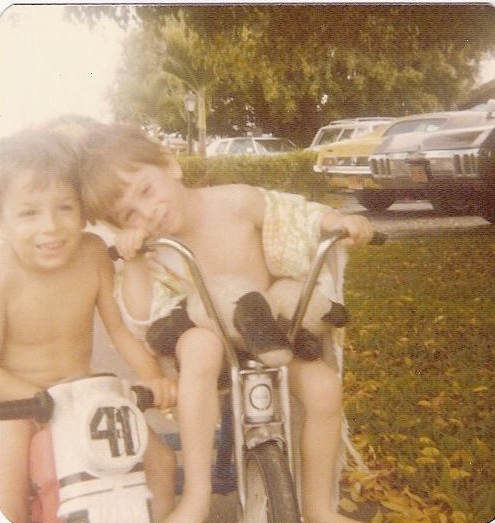 In general, I consider myself a happy person. For this reason, as a kid, I was considered “easy,” especially compared to my twin brother who, and I mean this lovingly, could be a bit moody at times. For that reason, if I was ever out of sorts or not exhibiting happy-go-lucky behavior, people wouldn’t stop asking me, “What’s wrong?” and be mystified when I told them I was upset. “But you are the happy one!”

As an adult, I realized that was actually a big issue for me—feeling as if I wasn’t allowed to be sad, or out of sorts. It impacts me to this day. Just the other night, I was in a crummy mood. I was tired, emotionally drained, and my body felt run down. “What’s wrong with you?” I was asked, and the answer, “I’m just really tired and out of sorts,” was so out of the ordinary that the person asking thought there was a deeper meaning to my mood. There wasn’t. I was simply exhausted.

It’s because of this that when I cry, I tend to cry alone. Like I did today, in my home office, where nobody could hear me.

The new normal that COVID-19 has brought us is getting to me. I worry about my family getting sick. I worry especially for my parents who are all alone down in Florida and considered high risk. I feel for my three children, seniors in high school, who are missing out on key milestones that characterize senior year including prom and, potentially, graduation. It pains me that my daughter misses her boyfriend so much that she cries. It upsets me that my son couldn’t have his opening night as the lead in The Addams Family and that my other daughter, social butterfly that she is, can’t run out and get a coffee with her friends, as she often does.

These things weigh on me and today, I felt that weight on my shoulders and it manifested itself in physical pain. I went to the bed in my office, crawled in it, and I cried, silently of course, because old habits die hard.

I’ve challenged myself to find the silver linings coming out of our new reality. I see more people walking in my neighborhood than I ever have. When I run in the morning, I have to dodge fewer cars on Long Ridge Road. My kids are always home and, while that may not be a silver lining for them, it is for me as I will miss them terribly when they go to college this fall. I’m also reconnecting with friends I haven’t spoken to in years. These are all good things.

I do believe that, for most of us, mood is a choice. For the most part, we can choose to be upset or choose to be happy, but our choices are, of course, influenced by our environment. If we wake up in the morning and the first thing we do is watch the news and that news is bad, it is harder to be happy. So, starting today, I’m going to start posting happy reflections about my life, as a way to counterbalance whatever negative thoughts I allow to creep in. To help me in this effort, I’m going to dig into the tens of thousands of pictures I’ve archived over the years, and write whatever comes to mind about what I see. Today’s picture is below. 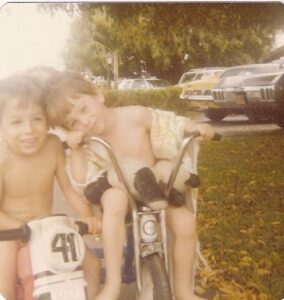 I mentioned my moody twin brother before. Here we are in the late 1970s, me on a trike and him on this plastic motorcycle we got for Christmas. Check out those muscles! Not on me or Jimmy, but the cars in the background. We were pretty inseparable as kids—our two siblings were 7 and 9 years older than us and while that age difference matters less now, it meant that he and I were pretty much on our own as far as sibling relationships go.

On my lap is a teddy bear that is still around to this day. Purchased for my brother Gregory in the mid 1960s, “The Bear,” as my father calls him, was remade many times by my maternal grandmother Maria Fauci, whom you will get to know in a future post (and yes there is a relation, but I don’t have Dr. Fauci on speed dial). I named the bear Shmoo and passed him down to my son Patrick who is taking fine care of him (though since my Grandmother passed in May of 1992, he’s not looking or smelling so fresh).

Jim and I often would act out anything we saw on TV. CHiPs was our favorite show in those days, but my parents would only let us watch it if we behaved in Church, which was enough of an incentive to stand, sit, and kneel at the appropriate times and not chase my father down the aisle when he was tapped to do the collection (true story). When we got older, and could ride two wheelers, we’d often pretend we were Ponch and John cruising the mean streets of Plantation, FL.

Around my shoulders is a blanket that, if memory serves, was a gift from Sandy Cimaglia. Quick story—the day we were born was my mother’s 41st birthday. She went into the hospital unaware she was having twins. In fact, she was told she was having a large baby girl (boy was my sister pissed that afternoon—”If you were going to have two, couldn’t at least one of them be a girl?”). My father, who was not in the delivery room given it was the 1970s combined with the fact that my mother was having a C-Section, got the shock of his life when the doctor came out holding up two fingers. He was elated thinking it meant V for victory—he turned white when he learned the truth. Then the scramble came on to get another one of everything, including the aforementioned blanket.

To this day, people still refer to us as “The twins.” I’m sometimes asked if it ever bothered me that people refer to us as a unit and not individuals. That’s usually followed by, “Didn’t it stink to have to always share your birthday?” Honestly, the answer to both questions is no. I never felt that I was any less of an individual because I am a twin. That’s not to say that there were not challenges—we were frequently compared to each other, we settled into different roles in the family, roles which sometimes had me getting the short end of the stick (Jimmy hated yard work), but I never wished I was anything but Jimmy’s twin brother.

So, I really feel as if this picture summarizes it all. Brotherhood. Love. The carefree days of our youth. We remain close as adults and, even though we don’t see each other as much as we’d like, we can easily pick up where we left off. Throughout the day it’s not uncommon for us to exchange movie quotes, random memories of childhood, or a simple “how are you doin’?” My wife tells me that she knows when I am talking to my brother because, from her end, I’m speaking in riddles and non-sequiturs that make no sense to her. It’s a fair observation. My parents said that we had our own language as babies and I don’t doubt that, considering we have our own language now!

I hope that as my kids grow older they will look back on their childhoods as fondly as I do mine with memories of a built-in best friend. So that’s today’s Daily Smile. I can’t wait to see what tomorrow brings.